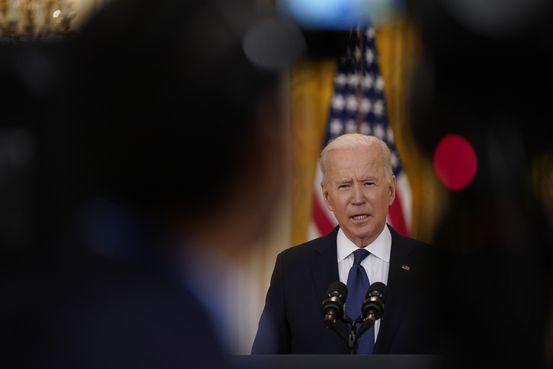 WASHINGTON—President Biden pushed back Monday against Republicans and business groups who say enhanced jobless benefits are discouraging Americans from working, defending his economic prescriptions and saying his administration would make clear that people can’t turn down suitable jobs and keep collecting benefits, except in specific circumstances.

“I never said and no serious analyst ever suggested that climbing out of the deep, deep hole our economy was in would be simple, easy, immediate or perfectly steady,” Mr. Biden said at the White House Monday.

The U.S. economy is poised for rapid growth this year as vaccination rates climb and consumer and business activity picks up, spurred in part by a flood of federal aid. But Friday’s lackluster employment report has fueled concerns among policy makers that a shortage of workers could restrain the pace of the recovery.

U.S. employers added a seasonally adjusted 266,000 jobs in April, the Labor Department said, a sharp slowdown from the previous month and well below the one million jobs economists expected to see. A separate report showed there were 7.4 million unfilled jobs in the U.S.

Republicans on Capitol Hill have argued enhanced benefits for unemployed workers are holding back the recovery by making it harder for businesses to fill openings, especially in low-wage sectors where the benefits may be bigger than the paycheck. The U.S. Chamber of Commerce last week called on Congress to end the extra payments now, several months before they are set to expire.

Under relief bills passed by Congress, unemployed workers are eligible for an additional $300 a week on top of regular state jobless benefits, which average $318 a week, according to the Labor Department. That means the average benefit recipient earns better than the equivalent of working full time at $15 an hour. Those enhanced benefits are available until September, for a maximum of nearly 18 months—about three times longer than most states typically allow.

The Biden administration has said other factors are keeping workers on the sidelines, such as fear of getting sick during the pandemic and lack of full-time child care, which has affected women in particular.

Mr. Biden on Monday played down the effects of enhanced jobless benefits on the labor market, saying “we don’t see much evidence of that.” He also said the administration would work with states to make clear that, under the law, workers receiving benefits who are offered a suitable job can’t refuse the position and keep collecting benefits, with some limited exceptions, such as because they have children who can’t go to school because of the pandemic.

“We’ll insist that the law is followed with respect to benefits, but we’re not going to turn our backs on our fellow Americans,” Mr. Biden said.

to work with states on reinstating job-search requirements for benefit recipients, the White House said. States eased those requirements last year as the pandemic spread and businesses across the country shut down.

The White House also touted other steps it is taking this week aimed at expanding hiring, including distributing aid for child care centers, restaurants and bars and state and local governments that was provided by the $1.9 trillion Covid-19 relief package enacted in March. It also highlighted existing measures it says could bolster hiring, such as a tax credit for employers that rehire laid-off workers and a program allowing some employees to return to work part time and still collect a portion of their jobless benefits.

Earlier studies of the extra weekly unemployment payments, which Congress initially set at $600 a week last year, found they weren’t affecting the rate at which people were returning to work during the pandemic. But economists cautioned at that time that the payments could become a bigger factor in reducing labor supply as the health risks from the pandemic receded.

Some states, including Florida, Montana and North Carolina, have begun tightening benefit requirements amid concerns of a potential worker shortage, and others have moved to cut off access to the federal benefits before they expire at the end of September.

“Almost every employer I spoke with specifically mentioned the extra-generous jobless benefits as a key force holding back our recovery,” Mr. McConnell said on the Senate floor.

He added: “We should not still be taxing the Americans who are working to fund continued extra benefits for those staying home. It’s not March of 2020 any more.”

Biden administration officials have said they don’t see evidence that overly generous jobless benefits are reducing labor supply. If the extra payments were a major factor, officials would expect to see lower job-finding rates in sectors where workers tend to have a larger share of their past wages replaced by jobless benefits, Treasury Secretary

said Friday. “In fact, what you see is the exact opposite,” she said.

Ms. Yellen also said the underlying details of Friday’s report paint a somewhat brighter picture of the labor market. For example, the number of people working part time for economic reasons declined, and the average hours worked edged up, she said.

Mr. Biden emphasized that the employment report provides a one-week snapshot of the labor market from the middle of April. Since then, every adult became eligible for the Covid-19 vaccine and vaccination rates have nearly doubled among working-age Americans, he said.

The U.S. still has about 8 million fewer jobs than before the pandemic took hold last year, and the number of job seekers rose in April from March, the Labor Department said.

Meanwhile, economic activity is robust, as newly vaccinated Americans flush with stimulus checks and savings are shelling out for cars, furniture and other big-ticket items.

U.S. gross domestic product—the broadest measure of economic output—grew at a seasonally adjusted 6.4% annual rate in the first quarter, putting the U.S. economy within 1% of its pre-pandemic peak. Economists surveyed by The Wall Street Journal expect 2021 economic growth of 6.4%, which would be one of the fastest growth spurts over the past 70 years.

Write to Ken Thomas at ken.thomas@wsj.com and Kate Davidson at kate.davidson@wsj.com

Rep. Liz Cheney tries to steer GOP away from Trump

US Motorists Urged Not to Panic at Pumps | Voice of America

US Urges Israel and Hamas to De-escalate Amid Dramatic Rocket Attacks | Voice of...