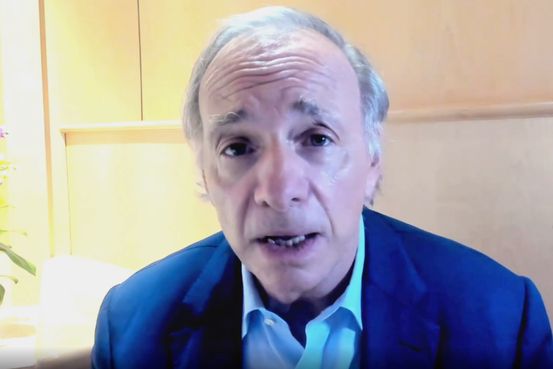 Ambitious government spending raises the risks of inflation and a devaluation of the U.S. dollar,

founder and co-chairman of Bridgewater Associates, said Tuesday during The Wall Street Journal’s Future of Everything Festival.

Mr. Dalio said the Biden administration’s economic agenda, which includes the $1.9 trillion Covid-19 relief bill signed in March and a proposal for $2.3 trillion in infrastructure spending, risks creating a bubble with too much money flowing into the economy. He also predicted there wouldn’t be enough demand from bond buyers to purchase new government debt, which would lead the Federal Reserve to continue its expansionary policies.

“The big issue is the amounts of money that have been produced and put into the system,” Mr. Dalio said. Such risks have to “be balanced carefully. Productivity is the key” to keeping the economy from overheating, he said. Mr. Dalio said he has spoken with Biden administration officials but declined to elaborate.

He described current stock-market valuations as a bubble, though not one driven by debt.

The Future of Everything

A look at how innovation and technology are transforming the way we live, work and play.

“There’s two types of bubbles,” Mr. Dalio said. “There’s the debt bubble when the debt time comes back and you can’t pay for it, and then you have the bubble bursting. And the other kind of bubble is the one where there’s just so much money and they don’t tighten it as much, and you lose the value of money. I think we’re more in the second type of bubble.”

Less concerning, he said, are the enhanced federal unemployment benefits that some business leaders and lawmakers have criticized as overly generous and discouraging Americans from returning to the workforce. While those payments “have been greater than the benefits, in some cases, of working,” he said that ending the $300-a-week supplemental payments before September, when they are set to run out, amounted to “splitting hairs.”

Mr. Dalio, who has spoken often about the investing opportunities available in China, pushed back on the idea that human-rights concerns, such as the Chinese government’s crackdowns on pro-democracy activists in Hong Kong and its repression of Uyghurs, a largely Muslim ethnic minority group, should keep investors away from the country.

“I don’t really understand, and I don’t study the human-rights issues. I follow what the laws are on those particular things,” he said, adding that there are human-rights concerns in the U.S. as well. “Would I not invest in the United States because of those?”

Mr. Dalio, who helped build Bridgewater into the largest hedge-fund firm in the world, is known for promoting algorithms and software to automate elements of both trading and workplace culture. But the applications of advanced technologies remain limited, he said, adding that artificial intelligence is currently striving for the intelligence level of “a five-year-old.”

While automation tools can raise productivity, he said, such technology “also has implications for jobs and employment, and that system has not been worked through.” Those issues are policy questions, not ones for individual companies to try to solve, he said. “Can you make the pie grow well and then divide it well so that it provides equal opportunity? That’s a policy question which hasn’t yet been taken on.”

and other shares, squeezing hedge funds in the process—Mr. Dalio said the trading app had, on the whole, changed the world of investing for the better.

“It’s information. It allows you to play the game. And there’s nothing like doing it in amounts you can afford,” he said. “It’s a real plus, but it has some drawbacks, too.”

Write to Lauren Weber at lauren.weber+1@wsj.com

Emerging from Pandemic, Smithsonian Re-opens Eight of its Museums  | Voice of America