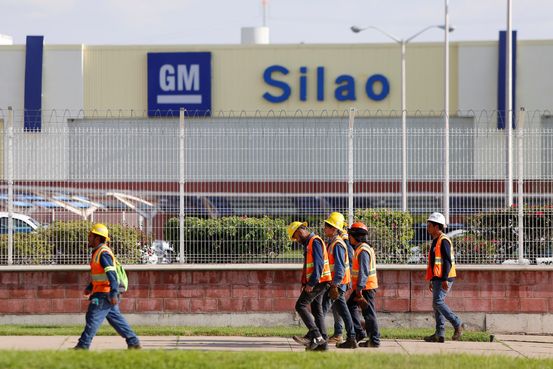 WASHINGTON—The U.S. is asking Mexico to review alleged tampering of a union vote at a

truck factory there, in the first use of a new labor-rule enforcement tool under the U.S.-Mexico-Canada Agreement.

The U.S. made the request after receiving information “appearing to indicate serious violations” of workers’ rights during a recent vote to approve a collective bargaining agreement at GM’s Silao assembly plant in the central Mexican state of Guanajuato, according to U.S. Trade Representative

GM has retained a third-party firm to review the situation and will cooperate with the U.S. and Mexican governments, a spokeswoman said.

“As a company, we respect and support the rights of our employees to make a personal choice about union representation and any collective bargaining on their behalf,” she said.

The Mexican embassy in Washington didn’t immediately respond to a request for comment.

The move takes advantage of USMCA’s labor-dispute settlement enforcement tool called Rapid Response Labor Mechanism, which makes it easier for the U.S. to bring complaints against specific facilities in Mexico.

Ms. Tai played a role in formulating the USMCA in her former job as chief trade counsel for the House Ways and Means Committee. She has said a priority is enforcing the rules of USMCA, the trade pact that succeeded the North American Free Trade Agreement and was signed into law by former President

to address the alleged violation involving two sparring unions at the Silao plant.

The lawmakers, led by Rep. Dan Kildee (D., Mich.), alleged that the vote by the plant’s workers was tampered with by members of a rival, pro-employer union through steps such as limiting voting hours and destroying unfavorable ballots.

U.S. government officials say the latest action complements the Mexican government’s ongoing investigation of the alleged abuse at the plant. But if the two governments subsequently fail to agree on the resolution of the issue, the U.S. may request the establishment of a USMCA panel to review the case and subsequently impose a penalty such as a tariff on the vehicles imported into the U.S.

The importers of the vehicles will now be notified of the possibility of the imposition of a tariff, depending on the outcome of the dispute.

Earlier this week, U.S. and Mexican labor groups said they filed a complaint against a Mexican auto-parts manufacturer, alleging that it violated the USMCA by suppressing its workers’ rights to unionize.

The manufacturer is a subsidiary of Philadelphia-based Cardone Industries Inc., which said it doesn’t believe the allegations in the complaint are accurate and would welcome a full inquiry.

Write to Yuka Hayashi at yuka.hayashi@wsj.com

US Consumer Prices Surged in April   | Voice of America

US Sanctions Seven Lebanese Linked to Hezbollah | Voice of America

Colorado Drillers to Combine, as Consolidation Continues in Oil Patch